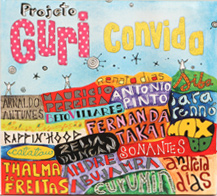 To Mark the beginning of the celebrations of the  Projeto Guri ’s 15 years, the Social Organization Sustenidos – decided to produce a CD that reflects the maturing and the innovations conquered though out this period and that could spread the diversity of sound that is the trademark of São Paulo and of Brazil, with the necessary modernity that is needed for a project destined to children and young people.

The project proposal was to unite tracks for the CD made up mainly of the invited composers’ songs, as well as having the participation of the Guris playing or singing in all of them, alongside to the composers. For this, we travelled a long journey: there were 18 months of work involving innumerous professionals of the Sustenidos, more than 380 students and their families, 23 invited artists, 3 musical arrangers and editors, 5 producers and many other collaborators.

The Sustenidos thanks all those who brought music and joy to this CD, especially our students, educators and those who accompanied the teams of the Sustenidos and the participants of the incentive. And we cannot forget to thank immensely the artists and the friends of Beto Villares and the Missionary José. The affection that you put into the this work can be heard in each one of the tracks.
The result is dedicated to all of you, with standing appraisal!

Under the conducting and orientation of the musical educators of the Sustenidos, 125 students shared the stage with the musicians Takai, Antônio Pinto, Beto Villares, Andreia Dias, Anelis Assumpção, Iara Rennó, Rappin Hood and Maurício Pereira. The children from the Harmonia, Julio Prestes (SP), Ibiuna, Mazzaropi, Achiropita and Brasilitália education centers participated of the show.

With the artistic direction of the producer Bento Villares, the CD is fruit of a work that united study, discipline, dedication and hundreds of students of the Projeto Guri. The months of practice resulted in 18 exclusive tracks, composed and recorded by artists especially invited for the project.

“The CD is a true encounter between our artist-students and the highlighted names of Brazilian music. It means one more way to encourage social development. Besides that, it also represents the technical quality that we offer, for it shows the capacity and professionalism of the students during the recordings and practices”, observes Alessandra Costa, executive director of Sustenidos.

The songs of the Guri Convida deal with themes related to childhood, music, creativity, games and first kisses. In the release show the following songs will be presented: Tatu, by Antonio Pinto; Convite, by Anelis Assumpção; Robotito, by Céu, who for the occasion will be interpreted by the students of the Guri; Fugitivos, by Maurício Pereira; Normal, by Beto Villares; Caim, by Andreia Dias; Cantando Ciranda na Beira do Mar, by Siba, with the interpretation of Maurício Pereira; Encarnada, by Iara Rennó; Virar o Jogo, from Rappin Hood; Sou Bobo Não, by André Abujamra, interpreted by students of the Guri Program; and lastly Sem Embaraço, by Fernanda Takai.